The highest seismic hazard values and the likelihood of earthquakes occurring converge typically in regions close to the edges of Earth's tectonic plates. In Europe, the countries with the greatest seismic risk are Italy, Greece, Turkey, Cyprus and Iceland. At the same time, in each country, there are areas at higher risk than others. Prevention, as well as the compliance with European standards regarding the design and construction of storage systems, are fundamental for the earthquake-proofing of racks.

Unlike conventional civil engineering structures, racks are designed specifically to withstand heavy loads. The stability of the housed merchandise is guaranteed by the connections between the uprights and the beams, as well as by the latticework structure called the frame.

Rack components are made out of high-strength steel profiles that are between 1.8 and 3.0 mm thick. They are subject to general, local and also distortional buckling, especially in the uprights. Predicting the structural behaviour of the racking is very complicated and, for that reason, its design requires tests to find out the mechanical characteristics of the components and their connections.

Earthquake-proof design of the racks

The design of the racks located in areas with a high seismic risk is much more complicated in relation to the racks located in other zones. The reason is that not only must they be able to withstand the dynamic forces (both horizontal and vertical) and the mechanisms of global or local collapse, but they also must avoid the collapse of pallets during an earthquake. 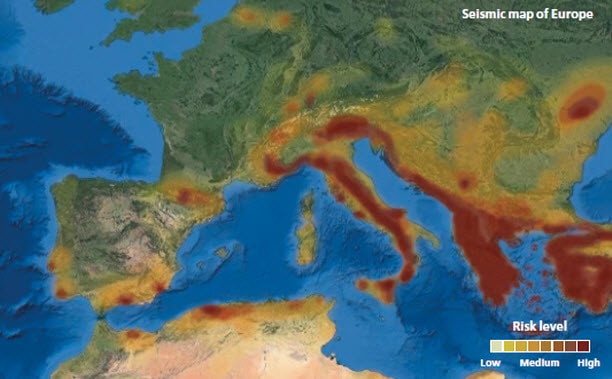 Falling pallets can cause severe damage to property, people and the structure of the racks, not to mention the economic loss to the warehouse owner, which is higher than the cost of the racks and the reinforcement to withstand earthquakes.

In Europe, up to a few years ago, there was no official documentation on the seismic design of the racks and designers referred to the instructions provided by the Rack Manufacturers Institute (RMI).

This North American trade association brings together companies from the material handling industry and includes, among its best practices goals for the sector, information on how to account for seismic actions.

In addition to these instructions, the designers also based their work on the Eurocode 8 of the CEN (European Committee for Standardisation), concerning the earthquake-proof design of structures (specifically for building).

However, the racks are particular steel structures whose behaviour is a far cry from building structures. As a consequence, many of the structural configurations used in the racks were not fully covered under those standards.

To solve this problem, the European Racking Federation (ERF) –an association made up of Europe's largest manufacturers, including Mecalux– drafted the recommendations for the design of earthquake-proof racks that, in 2016, inspired the EN 16681 standard, approved by the European Commission.

Research on the behaviour of metal racks during earthquake tremors is very new. In fact, the first studies were conducted in the United States after the quake in the town of Northbridge (Los Angeles), during the early morning of January 17, 1994.

Following the latest earthquakes in Europe –such as in Turkey in 1999 that had devastating consequences and a profound economic impact– and to compensate for the lack of studies on the dynamic behaviour of metal racks during seismic tremors, the European Commission put three investigation programs into place:

In 2016, the EN 16681 standard was approved (Steel static storage systems. Adjustable pallet racking systems. Principles for seismic design), and whose final formulation was based on FEM 10.2.08, the comments received after its application, as well as on the results obtained from the research programs.

According to this standard, racks in earthquake-prone regions must be designed and constructed to meet the following requirements with an adequate degree of reliability:

3. Movement of the unit loads
Seismic accelerations can cause the pallets to slip off beams when the static friction coefficient between the pallet and beam is exceeded. The consequences of these phenomena are: In addition, the EN 16681 states that the benchmark method of calculation is the modal spectral analysis, MRSA (Modal Response Spectrum Analysis).

The design of earthquake-proof structures requires, firstly, knowledge of the movements produced in the floor during an earthquake; said movement consists of displacements in any direction, combined with rotations of any axis.

In engineering, the seismic load is usually defined by an accelerogram. It is a time-acceleration graph of the terrain that represents the components of the acceleration in the horizontal and vertical directions produced by an earthquake in a given location.

MRSA is a study aimed at obtaining the set of horizontal actions that act on the racking levels, and that must be absorbed by frames, beams, braces, or their joints, among other components. It consists of estimating the response of the structure in the frequency domain rather than in the time domain. To do so, it is essential to know, on the one hand, the rigidity and natural behaviour of the structure and, also, the design spectrum of each location.

The design spectrum is the representation of the terrain acceleration (accelerogram) in the frequency domain. The parameters will vary depending on the type of earthquake, the exact location of the installation with respect to the epicentre, as well as the composition of the terrain.

The spectrum represents the response of an idealised system to an acceleration in the frequency domain. Therefore, it permits knowing the reaction of the structure during an excitation frequency. For example, if a rack has a natural frequency (T1), forces for that frequency can be obtained via the spectrum.

When evaluating the rack's behaviour, it is necessary to make a modal calculation (obtaining the natural modes of vibration and their frequencies) that includes:

With all these data, the standard collects and normalises how the majority of the most relevant and influential parameters (load type, degree of rack occupancy, type of unit load, among other factors) affect the racks. Furthermore, since it is a rack, other parameters that can modify the design spectrum must be considered, such as:

After achieving the design values of the seismic actions, combination rules must be applied. This application consists of combining the horizontal and vertical values related to the earthquake, as well as the weight of the racking and the unit loads.

Hereby the forces are obtained (the thrust the rack components must withstand) and it is verified that the racks will be able to withstand them. Subsequently, it is tested that the unit loads do not overturn or slide.
MRSA is the recommended method to calculate seismic actions, since the seismic spectra are easily generalised and normalised. The spectra represent the seismography of a given place, which avoids having to make multiple combinations from evolutionary calculations on various calculation accelerograms, which reduces calculation times and provides safe results. With lower intensity earthquakes, the LFMA (Lateral Force Method of Analysis) can be used, which consists of simulating the earthquake using a set of equivalent horizontal forces.

Mecalux has knowledge of and extensive experience in earthquake-prone regions. In that sense, its earthquake-proof facilities located in Turkey, Italy and Chile –the most earthquake-prone country in the world, due to its location on the Pacific's Belt of Fire– make for a natural laboratory for scientific research related to this phenomenon.

Within its engineering department, the company has a team specialised in designing racks capable of withstanding seismic actions. To this end, it uses the best quality materials, is at the forefront of the latest technological innovations and applies structural calculation programmes based on simulations.

The Mecalux methodology consists of generating a three-dimensional model of the structure using finite element programmes. The data set inserted into it includes the type of materials, the dimensions of the profiles, the design spectrum, the characteristics of the unit loads, etc.

Also, structural simulation is of vital importance to check the strength of the racks during earthquakes.

Mecalux is a leading international storage solutions manufacturer, known for its high quality and safety standards. Dedicated to developing earthquake-proof racks, it aims to ensure the integrity of structures, the stored products and, above all, the preservation of human life.